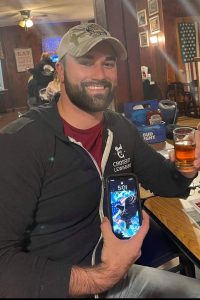 HARRISBURG — State Representative David Rowe (R-85th, Lewisburg) created a stir on social media Wednesday night when he shared a photograph of himself at a bar, holding a beverage in one hand, and his cellphone in the other.

The phone shows the time, 5:01 p.m.  The post is an apparent reference to the Thanksgiving Eve drinking restrictions imposed by Governor Tom Wolf this week. The one time only rule stated that patrons had until 6 p.m to finish their alcoholic beverages.

There is no indication in the photo that any law violations have occurred and Rep. Rowe does not specifically state his motive, his only comment is “Happy Thanksgiving, Governor Wolf!” Rowe has been a vocal critic of the governor’s COVID-19 policies.

The post received numerous comments, including one from Kendra Aucker, CEO of Evangelical Community Hospital, who said “My team at the Hospital is working diligently with more sick people than you can imagine. This type of post by a leader in our region at Thanksgiving is demoralizing.”

President and CEO of the Greater Susquehanna Valley United Way, Joanne Troutman, also responded. “This is a disgrace. Trying to lead in a community and help people when it’s clear so many support this type of blatant disrespect is beyond discouraging.”

Earlier this week, Governor Wolf ordered bars and restaurants to stop selling alcohol at 5 p.m. on Thanksgiving Eve, typically one of the busiest and most crowded nights of the year for bars and social gatherings. The mitigation effort stated that while sales must cease at 5 p.m., no patron may possess alcohol within such businesses after 6 p.m. The regulation allows for alcohol sales to resume at 8 a.m. on Thanksgiving Day.

We have reached out to Rep.  Rowe for comment.