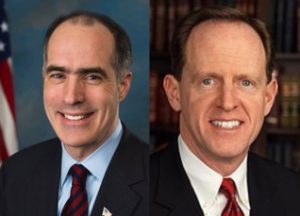 In his statement, Senator Toomey says, “President Trump and former Vice President Biden have run hard, spirited campaigns that have inspired record civic engagement. I applaud both of them for their desire to serve our nation.”

Toomey goes on to say that the media’s projection of the election’s outcome is only a projection and a final outcome will be reached when the election process concludes, “which is after all legal votes have been counted, litigation is resolved, and any recounts are completed.”

Meanwhile, Senator Casey congratulated President-elect Joe Biden and Vice President-elect Kamala Harris on their victory in his statement. He says, “It’s now time to unite and heal our Nation so we can build back better. Coming together as one Nation, we can defeat the virus, rebuild our economy for workers and families and provide a brighter future for our children.”

You can read the full statement from Senator Toomey HERE

You can read the full statement from Senator Casey HERE