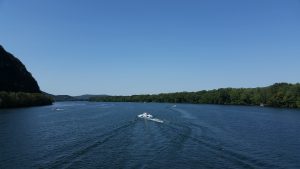 Harrisburg, PA – The North Branch of the Susquehanna River in northeastern Pennsylvania has been selected by a public vote as the state’s 2023 River of the Year, Department of Conservation and Natural Resources (DCNR) Secretary Cindy Adams Dunn and Janet Sweeney of the Pennsylvania Organization for Waterways and Rivers (POWR) announced today.

“Through planned River of the Year celebrations, public awareness of the value of the North Branch of the Susquehanna River will be increased and major initiatives along this section of the river will be underscored,” Dunn said. “Economic revitalization of river-town communities will enhance access to the river; increase tourism; and provide additional land and water-based recreational opportunities for local residents and visitors alike.”

A water trail, the Susquehanna River North Branch is widely used by paddlers, anglers, recreational boaters, and wildlife enthusiasts. Recreationalists enjoy the calm, class-I waters which serve as both a playground for experienced boaters to explore the area’s natural and historic offerings, as well as a learning ground for new paddlers to develop their skills.

In addition to the paddling opportunities, visitors are surrounded by abundant history. These historic connections earned the water trail a “National Recreation Trail” designation by the National Park Service in 2009 as part of the larger Captain John Smith National Historic Trail system; a recreation trail that celebrates the exchange of goods and cultures between the early, famed explorer of the Chesapeake Bay and the native peoples of the Susquehanna River basin.

The public was invited to vote online for the River of the Year, choosing from among four waterways nominated. A total of 11,438 votes were cast, with Susquehanna River North Branch receiving 4,098; the Perkiomen Creek 3,110; Conestoga River 2,490; and Schuylkill River 1,740.

“POWR would like to commend everyone for their support for the nominated rivers, especially for the strong showing of support for the Susquehanna River North Branch,” Sweeney said. “The River of the Year program continues to engage our communities by providing a wonderful opportunity to showcase all the nominated rivers and the great work being done in Pennsylvania on these resources. We are excited about the opportunity to highlight the Susquehanna River North Branch.”

“We nominated the North Branch in the hopes of receiving this prestigious designation in conjunction with our organization’s 25th anniversary in 2023 and now that we have it, we couldn’t be more excited,” said Cain Chamberlin, Executive Director of the Endless Mountains Heritage Region.  “We have an array of river paddles and sojourns planned for this year as well as other outdoor recreation related events that will meld perfectly with our management of the water trail. We’re committed to educating the public about paddling safety and encouraging everyone to be responsible stewards for the Susquehanna and its abundant tributaries.”

Cain thanked the co-manager for the North Branch, the Susquehanna Greenway Partnership, for its help in submitting the nomination and promotint the public voting portion of the contest, as well as the many water trail managers along this section of the river.

In cooperation with DCNR, selection of public voting choices was overseen by the POWR, an affiliate of the Pennsylvania Environmental Council (PEC).

A commemorative River of the Year sojourn is among many paddling trips supported by DCNR and POWR each year.

An independent program, the Pennsylvania Sojourn Program, is a unique series of a dozen such trips on the state’s rivers. These water-based journeys for canoeists, kayakers and others raise awareness of the environmental, recreational, tourism and heritage values of rivers.