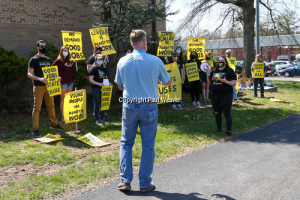 The citizens were members of advocacy groups, Sunrise Lewisburg and Sunrise State College.

They called on Congressman Keller to commit to ‘Good Jobs for All’ and support Green New Deal proposals. The group said it was part of the ongoing national youth-led Sunrise Movement to make climate change matter in U.S. politics.

In a news release Thursday, Sunrise members say Keller refused to listen to their concerns, saying he would not meet with them with media present outside his office as well during the rally Wednesday.

Keller did tell the Sunrise members he ‘supports all energy, including solar,’ and invited the organizers to set up a meeting. However, Sunrise Lewisburg coordinator Mary Collier says the group has already requested a meeting on 10 separate occasions over the past three weeks. WKOK has reached out to Congressman Keller’s office for comment.