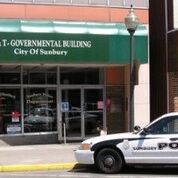 Sunbury’s current police station, widely viewed as unacceptable in the years ahead.

SUNBURY—By the end of April, the Sunbury Police Department should be using body cams in their work.  Police Chief Brad Hare spoke on WKOK Sunrise recently and said that a grant the department received last year provided new body cams and cameras in police cars.  He added that they applied for this grant before the incidents surrounding George Floyd:

“A lot of people were kind of like well is this the reason you guys are wanting them?  No, we were already applying for them.  We just wanted to be more transparent,” Hare said.

The chief says the new equipment is important.

Hare says the pandemic slowed down the installation of the new equipment.  The in-car cams are working but not hooked up to the body cams just yet.  The new body cams should be working by the end of April.  You can hear the full interview on the podcast page.