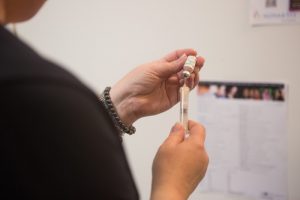 Acting Secretary of Health Alison Beam says some providers ‘inadvertently’ used 200,000 second dose shipments as first doses, creating a major backup, “That’s roughly our entire Moderna allocation for the week, and so we had to be able to adjust. We were able to partner with our federal pharmacy partners and our federal retail partners to identify any inventory we could use in the immediate to help address this.”

Beam says the Pfizer distribution statewide is not affected by the error. She says these errors were first discovered in the beginning of January and the problem compounded ‘week after week.’

Meantime, Beam says providers will be allowed to avail themselves of CDC’s permission to administer second doses by the 42nd day after the first Moderna dose, instead of by the 28th day after, “Which is a rescheduling of a second dose appointment to the fifth or to the sixth week, and all of that was done in an effort to minimize any disruption to those first doses, which will have a reduction for the following week.”

Beam says providers will be finding out their new allocations Wednesday. She says the Department of Health is not placing blame on anyone and would not say who was responsible. Beam noted the error came from ‘eagerness’ to get the vaccine to the public, inconsistent vaccine allocations, and ‘confusion’ from Operation Warp Speed on vaccine deliveries.