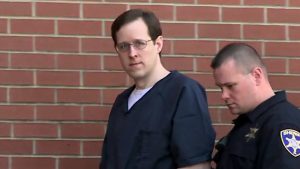 SCRANTON, Pa. (AP) — AP is reporting… The parents of a gunman who killed a Pennsylvania state trooper and permanently disabled another eight years ago in an ambush of a police barracks have settled a lawsuit that accused them of partial responsibility for the attack.

Tiffany Dickson, widow of Cpl. Bryon Dickson II and Trooper Alex Douglass had alleged in separate lawsuits, later consolidated, that Eugene and Deborah Frein knew their son Eric was mentally unstable and dangerous but allowed him access to weapons and imbued him with a hatred for law enforcement.

The Freins had vehemently rejected the idea that they were responsible. They were never charged, and none of their weapons were used in the September 2014 ambush outside the Blooming Grove barracks. Their attorney recently moved to dismiss the suit, saying there was no evidence they knew their son was a danger.

A Lackawanna County judge was to hear arguments on the motion on Oct. 31 but court documents indicate that he was advised that the case had been settled, the (Wilkes-Barre) Citizens’ Voice reported.

Douglass’s attorney, Vincent Cimini, declined Friday to reveal details of the settlement, which is confidential, but said his client, who he said had endured multiple surgeries, was relieved that it was over, The Citizens’ Voice reported. The paper said the comment was also sought from attorneys representing the Freins and Tiffany Dickson. “It was a very emotional case,” Cimini said. “This completely turned his life upside down.”

Prosecutors have said Eric Frein was hoping to start an uprising against the government when he opened fire with a rifle on the barracks. Cpl. Dickson, a Marine veteran and married father of two, was killed in the late-night ambush, and Douglass was left with devastating injuries.

Frein, 39, of Canadensis, was captured after a 48-day search. He was convicted and sentenced to death, though Pennsylvania has a moratorium on executions.