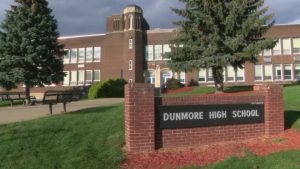 DUNMORE, Pa. (WBRE/WYOU) – WBRE is reporting… Four Pennsylvania high school students have been charged, two as adults and two as juveniles, for conspiring to carry out an attack on the school on the 25th anniversary of the Columbine massacre, Lackawanna County District Attorney Mark Powell announced Friday.  Dunmore High School students Zavier Lewis, 15, and Alyssa Kucharski, 15, are being charged as adults due to the serious nature of the threats, DA Powell said.  According to court paperwork, text messages were uncovered between the students discussing plans to “shoot up the school”, with another student calling “dibs” on a specific victim.  The students wrote that they “hated” Dunmore High School and wanted “everything to go down like that,” referring to the 1999 Columbine High School mass shooting, investigators say.

It was also noted by investigators the intended date chosen by Lewis and Kucharski was April 20, 2024, the 25th anniversary of the shootings.  Within the text messages in the court affidavit, the students discussed that Kucharski made Molotov cocktails as well as homemade explosives in the form of gun powder and CO2 cartridges. Investigators say another student told them Kucharski had 20-30 Molotov cocktails underneath of the front porch of her home.  Court papers say the student’s plans were to use bombs first and then shoot the guns. They had even created a title for the planned attack, investigators say: “Natural Born Killers.”  Kucharski told a student she was also going to purchase gas masks, bulletproof vests and trench coats, police reports say.