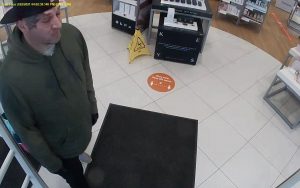 HUMMELS WHARF – Selinsgrove state police are looking for a man who threatened a salon manager after he refused to wear a mask inside the establishment. Selinsgrove troopers say the incident occurred just after 4 p.m. Monday in Monroe Marketplace in Monroe Township, Snyder County.

Troopers say the man entered the store and when asked to wear a mask, became irate and began screaming profanities, disturbing customers and employees. The male then went outside and made a threatening hand motion toward the manager.

Troopers say the suspect is possibly in his 30s with a face tattoo and drives a red/maroon colored SUV. Anyone with information is asked to call Selinsgrove state police at 570-374-8145.