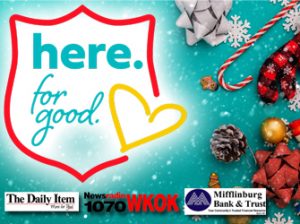 WEST MILTON — A single mother of two daughters was without work for six months due to the COVID-19 pandemic.

Sulmary Rivera, of West Milton, is a recipient of the Salvation Army’s Here. For Good. campaign. The interview with Rivera, who speaks Spanish, was conducted through a translator.

Rivera said she is working now. The Salvation Army has helped her during the last six months with basic necessities.

Her daughters are ages five and eight. They would like scooters and LOL Dolls for Christmas.

Rivera complimented the Salvation Army for being “very efficient,” she said.

The 2020 “Here. For Good.” campaign is a continuation of the Needy Family Fund that has raised more than $3.06 million since 1987 during the holidays to assist the Valley’s less fortunate. The campaign is administered by Salvation Army citadels in Milton and Sunbury and sponsored by The Daily Item, Sunbury Broadcasting Corp. and Mifflinburg Bank & Trust. The 1994 Charles B. Degenstein Foundation will also match the first $50,000 in donations.

Donors can make checks payable to Here. For Good. Campaign and mail or drop them off at any location of program co-sponsor Mifflinburg Bank & Trust. Donors can also make any deposited donation or mail a check to 250 E. Chestnut St., Mifflinburg, PA, 17844, or donate online at www.hereforgoodcampaign.org.