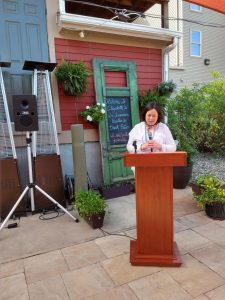 LEWISBURG – Community leaders held a celebration of the return of the hospitality industry in downtown Lewisburg and all of Union County.

It’s in part thanks to the COVID-19 Hospitality Industry Recovery Program (CHIRP) – created by the Wolf Administration through the governor’s recent transfer of $145 million appropriated by the legislature into grants.

Carrie Fisher-Lopore, Deputy Secretary of Tourism, Marketing and Film for the state DCED said, “They represent our shared experiences, our history and our future. So I am incredibly excited to see this critical funding under the CHIRP program making its way to those business owners.”

She along with members of the Lewisburg Downtown Partnership, SEDA-COG and other local leaders gathered at Elizabeth’s Bistro- one of 19 Union County businesses who received CHIRP funding. Eight of the grant recipients are in downtown Lewisburg. 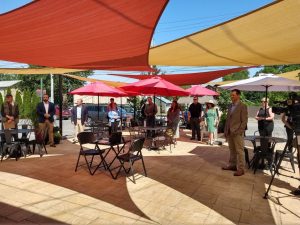 The businesses used funding for a variety of areas – not just to bring back employees and simply make ends meet, said Liz Furia, owner of Elizabeth’s, “As money came through we realized we could do a nice patio, so it sort of was an evolution of what was taken. We always wanted to do a patio but we never thought we’d do something this big or this grand and we really didn’t have the backing for it, but this really worked out well.”

Elizabeth’s received $25,000 in CHIRP funding. The bistro turned a recently paved parking lot simply to have outdoor dining at the start of the pandemic, into its new patio.

Lewisburg Downtown Partnership Executive Director Ellen Ruby says the process was seamless for business owners, “They moved so fast…The money was allocated to the counties and then SEDA-COG stepped up and created a grant portal that made it very easy for the businesses to apply for the money, determine eligibility, things like that, and then quickly distributed the funds as well.”

Overall, Union County received over $502,000 to distribute to businesses in the hospitality industry. The grants were intended to offset lost revenue, all businesses who received funding lost equal or greater than 25% of revenue over the past year. SEDA-COG says it was able to assist hospitality businesses in 10 of its 11 counties through the CHIRP program.