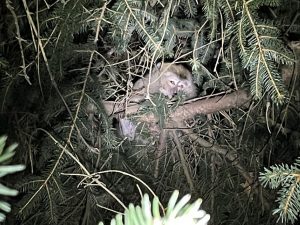 DANVILLE – A Danville woman is now concerned for her health after coming into contact with one of the monkeys from Friday’s crash along Route 54 near Interstate 80. WBRE reports Michele Fallon is just received her first dose of rabies vaccine and a round of anti-viral medication, after a monkey hissed in her face at the scene the crash.

Fallon says she grew concerned because she has an open cut on her hand and developed pink-eye like symptoms, so she went to the emergency room at Geisinger Danville.

Fallon says Friday she saw a truck hauling a trailer collide with a dump truck and pulled over to help the driver. That’s when Fallon came face-to-face with an agitated monkey.

The truck was hauling 100 monkeys from Africa, headed to a lab in Missouri for testing. The three monkeys that escaped have since been recovered.

But during the search, officials warned the public not to come near the monkeys because they could transmit disease. Fallon will be on preventative medicine for about two weeks.

The USDA is now investigating the incident after PETA filed a complaint.