“As the Supreme Court affirmed today, the Biden Administration’s employer vaccine mandate is an overreach of the federal government’s power. OSHA lacks the authority to require employers to force their employees to be vaccinated. Over the last few months, this mandate has left business owners reeling over how to comply and, more importantly, employees concerned about keeping their jobs. I applaud the Supreme Court’s decision to stop enforcement of this mandate while the courts fully review the legality of the Biden Administration’s actions and bring a sense of certainty back to the workplace. I look forward to the Court’s decision in the future and this unconstitutional mandate, issued by the Biden Administration, being permanently struck down.”–Congressman Dan Meuser 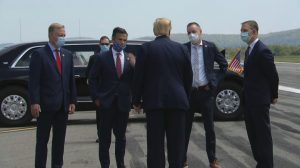 “The U.S. Supreme Court ruled 6-3 to stop President Biden from implementing his authoritarian vaccine mandate on American workers. This is the outcome we expected—with the Court asserting that President Biden lacks the constitutional authority to unilaterally dictate federal law. While the case now returns to the lower courts, I will continue my efforts to permanently eliminate this unconstitutional mandate under the Congressional Review Act (CRA). Our CRA resolution has the unanimous support of the entire House Republican Conference, and our team has held productive conversations with House Democrats who recognize how disastrous President Biden’s mandate would be if enacted. I am hopeful that this ruling will inspire more House Democrats to join us to force a vote on the Floor and eliminate this egregious mandate once and for all.”