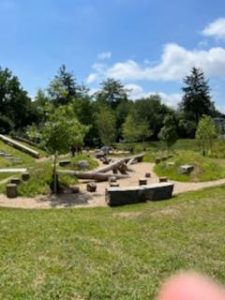 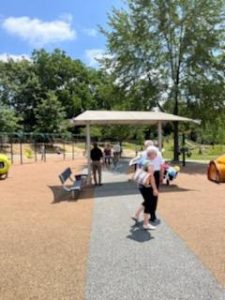 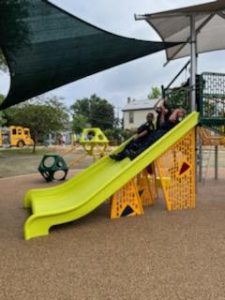 LEWISBURG — The latest phase of work is complete at Hufnagle Park, Kidsburg and the Bull Run.

A ribbon cutting was held Friday for the Bull Run Greenway Improvement project, that included a floodplain restoration project. The reopening comes on the 50th anniversary of the 1972 Hurricane Agnes flood.  A new Kidsburg Playground was also unveiled.

SEDA-COG Executive Director Kim Wheeler, “There’s been so many iterations of people from Agnes back in 1972, to the planning and design stages today, to be able to open this up to a new generation of residents and children of today and tomorrow to be able to enjoy and understand what it means to be part of a community.”

Also now open is an extension of the Buffalo Valley Rail Trail, it now ends at Hufnagle Park.  There is also a new nature play park, and a public restroom with a hand washing and sanitizing station.

The Kidsburg Playground was the donation of  Playworld/Playpower, as they recognized the William Cameron Engine Company, who assisted at the plant’s fire in May of 2021.

“It’s rare that you’re able to say thank you, as a business leader, directly to people who are able to help us and help our business and our enterprise. We hope for many decades to come the children of all the first responders, the grandchildren, the nieces and nephews are able to experience at least a moment of joy on this playground,” Playpower/Playworld CEO Bryan Yeazel said.

He also recognized the heroic efforts of former Lewisburg police chief Gordon Hufnagle during the 1972 flood as another act of bravery remembered at the park.

State DCED Deputy Secretary Rick Vilello also attended on behalf of the Wolf Administration, “This is just an incredible project. The governor from day one has talked about places to live, work and play and how you make a difference. This is firefighters and community investment, and it’s beautiful. This is a model for the rest of the state.”

The $1.4 million project was funded by various state grants and the Borough of Lewisburg. When other work at the south end of the park is complete, the next phase of the greenway improvement project will take place north of St. Louis Street at the park, for construction of an amphitheater and continued flood plain restoration.