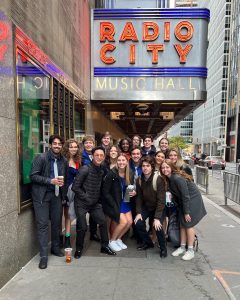 LEWISBURG – One of the world’s most famous shows celebrating the holiday season had some local flavor to kick off one of it shows.

The Bucknell group was chosen to perform in the show’s “Sounds of Christmas” segment, which gives a chorus a chance to perform in a five-minute a cappella performance before the curtain opens on The Christmas Spectacular. The group’s student leaders made all of the arrangements, applying last summer and providing the required performance video in order to be accepted.