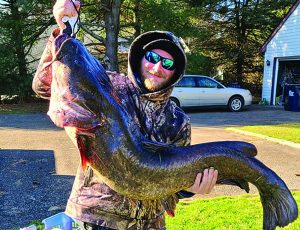 Joshua Dixon hoists the 57-pound flathead catfish that is the largest of its species encountered to date in the Susquehanna River. (Photo courtesy of the Maryland Department of Natural Resources)

YORK – A record fish was pulled from the Susquehanna River in Maryland recently. PennLive is reporting, the 57-pound, 50-inch long flathead catfish was caught about 10-miles south of the Pennsylvania-Maryland state line.