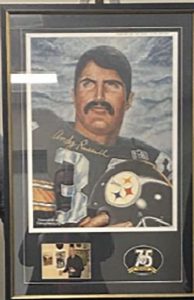 The former player announced Tuesday, through the Andy Russell Charitable Foundation, he and his wife Cindy were donating the limited edition poster. It came straight from his memorabilia room at his Pittsburgh home.  The framed poster also includes a photo of Russell standing in front of the poster and his personal 75th anniversary uniform patch.