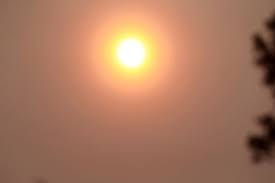 SUNBURY – You may have noticed some hazy and smoky conditions across the Valley the last few days.

AccuWeather Meteorologist Joe Lundberg says it’s definitely coming from massive wildfires in the west in recent weeks, “And the jet stream winds have carried that southeastward, across the Great Lakes and into our area. It was particularly thick during the day Tuesday, about as thick as I’ve seen it around here in many, many years.”

Lundberg says the smoke and haze will start to thin out, as a cold front makes its way to the area, “We should have several days where there’s little to no haze in the atmosphere…tomorrow,  Friday, and probably Saturday.”

But the haze may return sometime next week, “There maybe some concern down the road as the flow becomes more west-northwesterly aloft once again, that as some of those wildfires continue to burn, some of that smoke may be drifting back into our area sometime next week…something we’ll have to pay close attention to in the coming days.”

Many national reports have indicated smoke and haze from the west could be seen as far east as New York City.