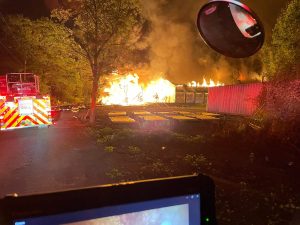 PAXINOS – There was a two alarm fire at Shingara Enterprises former location along Route 61 in Paxinos Wednesday night. No injuries were reported.

Northumberland County 9-1-1 tells us, a large commercial building was destroyed. Route 61 was blocked for a time but is open now. Crews were done about 2:30, but returned for a rekindle at 4:24am.