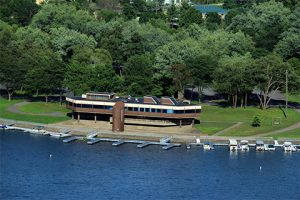 SUNBURY – Pass another Growing Greener initiative and soon residents can see the old Shikellamy Marina building restored and other infrastructure needs at the state park addressed.

That’s the message from DCNR Secretary Cindy Adams Dunn who visited the fabridam work site Monday, “It’s on our capital list and we recognize the urgency. If we can get ‘Growing Greener 3’ as proposed by the Governor, Senator Gordner, (R-27th, Berwick) and representative Culver (R-108th, Sunbury).”

“We’ll move it up on the list and get that project done. We will incorporate public engagement there. We know there’s a lot of interest and we want to make sure the building gets used by the community.”

The bill ‘Growing Greener 3’ was co-sponsored by Sen.  Gordner last October and sponsored in the house by Rep. Culver. Previous Growing Greener initiatives have been passed under earlier administrations. This current bill would result in $500 million, with $225 million going toward DCNR, and 50% of that funding would go to state parks for infrastructure needs.

If funding is approved, Shikellamy State Park Manager Andrew Leidich says the two-floor marina building would become ‘reserveable space,’ “Some people refer to it as ‘an open-air, pavilion style.’ It will be reserveable space from the top platform. Part of it might be enclosed. There might be bathrooms or a catering kitchen space on the top floor as well.”

Leidich says additional office space or a possible new boat rental location might go on the bottom floor. If the boat rental were to move locations at the park, Leidich says he’s unsure what would be the future of the current boat rental building, but it still would be used.

No matter what, Leidich says all Shikellamy State Park buildings badly need upgrades, “Everything, such as the boat rental building or other restrooms in the park is the same era back to the early 1970s. We all here on staff recognize they are outdated facilities, so were hoping with all this talk about infrastructure planning and budgeting, we might get some additional funding.”

Governor Wolf has voiced his support for ‘Growing Greener 3,’ and lawmakers hope to include the funding in this year’s budget set to be finalized this week.