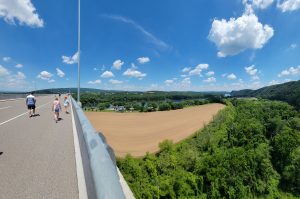 NORTHUMBERLAND – Perfect weather for a walk on a new bridge . . . PennDOT estimates more than 6,000 people got a chance to be on the soon-to-be-opened Central Susquehanna Valley Transportation Project’s river bridge. Ninety-degree temperatures greeted the walkers, bikers and strollers on the new $150 million bridge.

Eric High, District Executive for PennDOT District 3-0, said he was pleasantly surprised by the turnout, “We were expecting about a thousand people and we’re well over that. As of noon, halfway through the event, we were at 2,000 and there have been a lot more coming in.”

High said the entire $900 million project has been 50 years in the making and will be a major boon for The Valley: “It kind of makes me speechless – the amount of investment into finishing the Route 15 Corridor from Harrisburg to New York state – it’s definitely going to be a boon to the local economy and to travelers through the area.”

High had some fun facts about the new bridge. He said, “This bridge that crosses the west branch of the Susquehanna River is nearly a mile long. It’s 4,500 feet long. It’s almost 200 feet high at the western end. It’s the eighth-longest bridge in the state of Pennsylvania, so it’’s an impressive structure.”

PennDOT said the bridge will be opened to vehicle traffic in early July, adding the Northern Section connects Route 147 south of Montandon in Northumberland County to Route 15 south of Winfield in Union County. You can find more on the project at csvt.com.