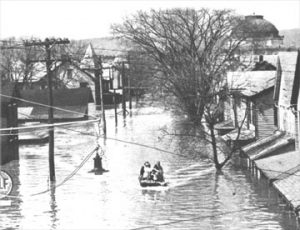 ‘Agnes Revisited’ Being Shared Across The Valley This Week

LEWISBURG – For some residents of The Valley, the 50th anniversary of Agnes has been a milestone, but for a Bucknell professor and a student, it’s been a ‘made for research’ opportunity.

Andrew Stuhl, Bucknell Associate Professor, and chair of the Department of Environmental Studies and Sciences led the team and said they’ve helped to produce a research study, an episode of ‘Stories On Tap,’ and the ‘Agnes Revisited’ multimedia project.

He says he found out how people learned to become leaders, “They see an opportunity to become an emergency response official, to step into elected office, to go to the planning commission, this happened in communities all across our Valley. I think that’s the story this week as we celebrate the 50th anniversary that we want to highlight is where people saw, ‘Hey, its our time to lead.’”

Bucknell Presidential Fellow and senior Bethany Fitch is also a part of the team. Stuhl says he and Fitch will be in Milton Thursday afternoon from 2-4 p.m. for a ‘pop up museum’,’ “Instead of a typical museum exhibit where you go and view things that are on display, you bring things to display yourself. So we’re curious about what people have, the Miltonians and people of the Milton area to bring to the public library in Milton. It’s a temporary display, you can bring it home, we’re not gonna keep it, and just have light refreshments and conversation.”

Stuhl says the study also includes plenty of stories from Sunbury, benefitting from the protection of the city’s flood wall, “So in Sunbury, we heard from the Zimmerman’s (Chrysler, Dodge, Jeep and Ram Truck) down there, there auto dealership right by Shamokin Creek, they have an incredible story about how they respond in times of flooding. We heard from Donna Ross, who was in The Daily Item this past weekend sharing her story about scribbling ‘We Love You Wall’ on the Sunbury wall.”

They say anyone who still wants to share their Agnes story can email [email protected]. You can hear more about the study on the WKOK.com Podcast Page or wherever you listen to podcasts.