HARRISBURG, Pa. (AP) — AP is reporting… Proposals to hold Pennsylvania’s presidential primaries in March rather than April and to permit poll watchers to operate outside the counties where they live were advanced Wednesday by a divided House State Government Committee.  Both bills had already passed the state Senate and were approved for consideration by the full House.  The state’s primary during presidential election years would be moved from the fourth Tuesday in April to the third Tuesday in March. Supporters say the change would position the state to have more of an impact on the parties’ choice of presidential candidates.

“Right now Pennsylvania’s primary really doesn’t matter in the scheme of national politics,” said committee chair Seth Grove, R-York, noting a recent exception was the Barack Obama-Hillary Rodham Clinton primary in 2008.  The vote was 16-8, with two Democrats joining all Republicans in favor.  Grove and the committee’s ranking Democrat, Rep. Scott Conklin of Centre County, both said the bill may need to be altered so that the period of signature gathering does not start around Christmas.  The third Tuesday in March is expected to also be the 2024 presidential primary day in Arizona, Florida and Illinois. In 2020, Pennsylvania’s primary was the same day as votes in New York, Connecticut, Rhode Island, Maryland and Delaware.

Lisa Schaefer, executive director of the County Commissioners Association of Pennsylvania, the group that represents county governments that run the nuts-and-bolts of state elections, said election workers in December can still be finishing work from the previous month’s election.  If the “third Tuesday in March” schedule had been used this year, it would have meant a March 15 primary with petition circulation Dec. 13-Jan. 4, Schaefer said.  “You’re really looking at a very short window of time for counties to turn around and get those petition packets ready and get ready for the primary,” Schaefer said. Her organization has not taken positions on either elections bill.

The poll watchers’ bill, sponsored by the current GOP gubernatorial nominee, Sen. Doug Mastriano of Franklin County, would give candidates the right to have an additional observer and post them inside, close enough to see any canvassing and precanvassing.  “There’s no reason to have poll watchers if they aren’t able to be in the line of sight and clearly see what’s happening,” said Republican Rep. Paul Schemel of Franklin County. Rep. Eric Nelson, R-Westmoreland, called the bill “a clear opportunity to allow voters to have enhanced confidence and belief that we’re achieving election integrity.”

Democratic Gov. Tom Wolf’s spokeswoman said he is firmly opposed to the poll watcher bill and called it an attempt by Mastriano to encourage voter intimidation.  “Republicans should focus their efforts on election reform measures that ensure that voters can freely and safely exercise their right to vote,” said Wolf press secretary Beth Rementer.  State Rep. Joe Webster, D-Montgomery, called the proposal “an atrocity of a bill” that feeds mistaken suspicion and distrust of the state’s elections.  “What is really happening around bills like this is we’re intimidating enough poll workers that they’re not going to be there,” Webster said.

Conklin warned the bill was “looking for trouble” and could require additional law enforcement monitoring at all voting precincts.  Grove said that although the bill would allow candidates three poll watchers at voting places, in reality “you’re lucky to get one.”  “What this bill does is allow for the checks and balances provisions within our elections that stem back to 1937 to continue,” updated for modern needs, Grove said.  The party-lines vote to advance the measure was 14-10. 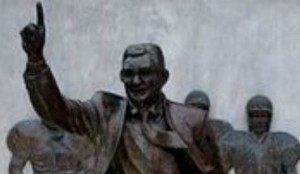 HARRISBURG, Pa. (WHTM) — WHTM is reporting… A Republican Pennsylvania lawmaker has introduced an amendment to a state Senate bill that would require Penn State University to provide information about the Joe Paterno statue.  The sponsor of the amendment, State Representative Aaron Bernstine (Butler/Beaver/Lawrence), has attached it to Senate Bill 1283, which is an act providing funding for state-related universities (Penn State, Pitt, Temple, and Lincoln) for the fiscal year beginning July 1, 2022, and ending June 30, 2023.  The statue was put in place in State College to honor the former head football coach’s four decades at the university.

Then in July 2012, the university removed the statue from its location outside of Beaver Stadium because it had become a “source of division and obstacle to healing” after the Jerry Sandusky child abuse scandal.  According to Rep. Bernstine, the statue has since been moved to an unnamed secure location.  “The statue symbolized Coach Paterno’s many outstanding contributions to Penn State on and off the gridiron,” said Bernstine. “His legacy should remain alive for people to view and reflect. Removing the statue does not serve the victims of Sandusky’s horrible crimes.

The university is sending a mixed message by treating Paterno as a hero at the campus library where a plaque is displayed due to the millions of dollars he donated, but a villain at the stadium where he coached the Nittany Lions to two national collegiate championships and five undefeated seasons.  The amendment would require the university to submit a report of the statue’s location and method of storage/protection to the House and Senate Education committees. This report would be required for the university to receive funding from Senate Bill 1283.