HARRISBURG, Pa. (AP) — AP is reporting… Two months after the omicron variant of the coronavirus slammed hospitals with unvaccinated patients, Gov. Tom Wolf signed fast-tracked legislation Wednesday to help keep burned-out health care workers on board during a staffing crisis. The House unanimously approved the bill earlier Wednesday just before Wolf signed it. It authorizes $225 million, mostly for hospitals to give workers retention and recruitment payments.  Of that, about $36 million will go to facilities that provide inpatient behavioral health services.  Another $15 million will go to an oversubscribed program promising nurses up to $7,500 in student loan-debt relief, although officials acknowledged that the extra money still will not satisfy all of the more than 8,000 applications it has received.  The money is from federal pandemic relief signed by President Joe Biden last March.  The 14-day moving average of hospitalizations of COVID-19 patients hit an all-time high of above 7,000 in recent days. 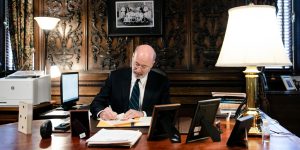 The surge in unvaccinated patients came during what Andy Carter, the CEO of the Hospital and Healthsystem Association of Pennsylvania, called “the most severe health care staffing shortage in recent memory.”  Neither lawmakers nor Wolf administration officials could estimate how many health care workers will be eligible for an increase in pay. They said they negotiated the sum with provider groups and insisted the money is adequate, at least for the time being.  The hospital association said the number of workers who benefit will depend on how each hospital decides to use the money.  The money is intended for staff who are involved in direct patient care, environmental services or clinical care, and not for executives, contracted staff or administrators.

Hospital systems and health care labor unions say staffing problems, including burnout and fatigue, existed long before the pandemic and urged lawmakers to keep working to fix it.  SEIU Healthcare PA, which represents unionized health care workers in hospitals and nursing homes, called the money a “good step towards the urgent reform that’s needed.”  However, it also said in a statement that lawmakers must pass legislation that deals with the underlying staffing problems in health care by requiring hospitals to maintain minimum ratios of patients to nurses.

Hospitals would save money by avoiding malpractice lawsuits and costly mistakes, the SEIU said.  The legislation is currently bottled up in House and Senate committees.  The Hospital and Healthsystem Association of Pennsylvania also applauded the money, and said it had recommended a number of ways lawmakers could help fix the underlying staffing crisis. Those include putting more money into clinical education programs to train more nurses and into student-loan repayment programs for health care workers, as well as removing regulatory hurdles for military veterans with certifications and international health workers.

HARRISBURG — AP is reporting… With former President Donald Trump holding off on making a new endorsement in Pennsylvania’s closely watched Republican primary for U.S. Senate, former hedge fund CEO David McCormick is turning to other influencers in the party in hopes of generating conservative enthusiasm.  Sen. Ted Cruz of Texas, who endorsed McCormick last week, headlined a rally for the candidate on Tuesday at a skeet shooting facility near Allentown that doubled as McCormick’s first public campaign appearance.  It was a preview of McCormick’s campaign strategy of enlisting an all-star roster of party stalwarts and Trump White House insiders, including adviser Hope Hicks and press secretary Sarah Sanders, who is now running for Arkansas governor.

The contest in Pennsylvania for the seat being vacated by retiring Republican Sen. Pat Toomey is expected to be among a handful of competitive races this year that will determine control of the Senate, a sentiment echoed by Cruz as he stumped for McCormick and pointed to the Senate’s Democratic leader, New York’s Chuck Schumer.  “Pennsylvania could very well decide this entire election,” Cruz said. “The Senate is in the balance. I believe if we win in Pennsylvania, we will defeat Chuck Schumer. And if we lose in Pennsylvania, I think in all likelihood, Schumer remains the majority leader.”  In recent weeks, the Republican primary field for Pennsylvania’s Senate seat has reset after the Trump-endorsed candidate, Sean Parnell, pulled out of the race amid an ugly custody battle with his estranged wife.

The national party is officially neutral, and party officials don’t expect Trump to make another endorsement in the race any time soon.  The candidates are working to win favor with state committee members ahead of an endorsement vote on Feb. 5 and so, for now, the surrogates will have to do.  McCormick is able to draw high-level support through his experience in Washington as a top official in President George W. Bush’s administration and through the influence of his wife, Dina Powell, a former deputy national security adviser in the Trump administration. He is also well known in high finance as the former CEO of Bridgewater Associates, one of the world’s largest hedge funds.

Before going over McCormick’s long resume as a Gulf War combat veteran and senior government official, Cruz told the crowd, “Let me tell you something about this guy: He’s a badass.”  Still, McCormick has several hurdles to overcome.  One, he just got into the race barely two weeks ago. Two, he just moved back to Pittsburgh after living in Washington and Connecticut since 2005, raising cries of carpetbaggery from rivals.  Three, he is relatively unknown to voters, especially considering that his primary rivals include Jeff Bartos, the GOP’s endorsed candidate for lieutenant governor in 2018, and Mehmet Oz, the heart surgeon, wellness author and TV personality who carries unrivaled name recognition as the host of daytime TV’s “Dr. Oz Show.”

HERSHEY, Pa. (WHTM) — WHTM is reporting… When 52,341 stuffed animals pile onto the ice in the 20th annual Teddy Bear Toss, the spectacle captures nationwide attention. But after the bears leave the rink, what happens next and where do they go?   The Hershey Bears annual Teddy Bear Toss game is always a sold-out crowd, with each fan carrying an average of five plush toys. After Bears forward Axel Jonssan-Fjalby netted the first goal of the game, thousands of bears rained down from the stands inside GIANT Center.  Mountains of cuddly toys line the arena, before volunteers bagged them up to be counted in the back. It took hours for all the toys to be recorded, but before the final horn sounds, a new world record was announced. In 2022, the Bears beat their own record from 2019.

And that’s usually the last time people think about where those bears go. But the work that happens after the game is over and the volunteers go home is what really drives the mission.  In the mornings to follow, 25 organizations make there way to the GIANT Center to pick up bags of bears to be distributed to the community. The organizations are all in Central PA including Dauphin County Children and Youth, Cocoa Packs, Boys & Girls Club of Harrisburg, Palmyra Lions Club, and Autism Society Greater Harrisburg Area. Additionally, with Hershey setting a new world record, The Sweigart Family Foundation has made a donation of $50,000 to benefit Children’s Miracle Network.