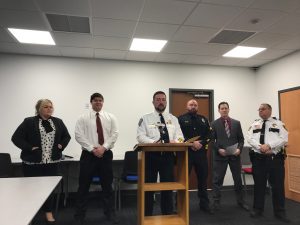 SUNBURY –Valley law enforcement has been very busy over the past few months responding to a rash of violent crimes.

Sunbury Police Chief Bradley Hare hosted a press conference Thursday to send a message to the public, “Understand, we have been working diligently over the past year on these cases. Not only Sunbury, but surrounding areas are fed up with the current rise in gun activity. They’re turning over every stone to try to get the criminals off the street.”

Chief Hare credited the Northumberland County DA’s Office, Stonington state police, the US Marshals Service and numerous Valley police departments for their assistance in the investigations.

He said community involvement will help to rid the city of violent criminals. “Do we need to be concerned?” he asked, adding, “I say be concerned and be aware of your surroundings . If you have any information, please call. The public has helped a lot during these investigations – that played a big part in several of the shootings we’ve had so far this year.”

Sunbury Mayor Josh Brosious said city council stands behind the department, “They have our full support to use any resources needed to prevent these crimes and capture the criminals that are doing these crimes. I know it’s a team effort to make this happen. It’s not going to be tolerated. If you come here, you’re going to get caught.” 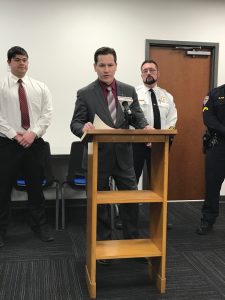 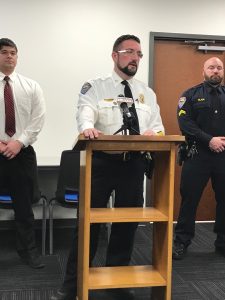 Hare said there are six more ongoing investigations at this time, including possible attempted homicide charges against 28-year-old Yusuf McLaurin who has already been arrested. McLaurin was charged with aggravated assault and possession with intent to deliver 426 grams of marijuana from a January 3 incident in the parking lot of the Strike Zone.

Sunbury police said they have a person of interest in the December 3 shooting incident on Fifth Street and are still investigating the firing of several gunshot rounds into a home on Bainbridge Street January 7.

Anyone with information is asked to contact Sunbury police at (570) 286-4584 or the Northumberland County Communications Center at (570) 988-4539. Police stress that all callers will remain anonymous and all information shared with them will be kept confidential. You can view the entire press conference HERE.