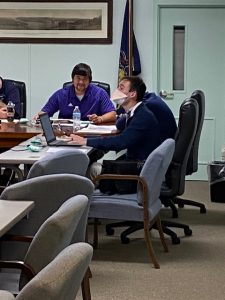 SUNBURY – Sunbury Mayor Kurt Karlovich is ready to hand out some bonuses and council agreed…The mayor discussed disbursing some of the city’s American Rescue Funds to part-time and full-time employees who worked, and continue to work, through the Pandemic.

Full-time staff would receive $2,000; part-time staff, $1,000. Details will be worked out. Funds could be distributed by the end of the year.

Mayor Karlovich also talked about raising minimum salaries for city employees. Full-time would earn at least $14.50/hour; part-time $13.50/hour. Council member Josh Brosious commented that council would need to get information from the treasurer about the long-term effect the increases would have on the budget before a decision can be made.

In other business…The mayor recommended a letter of support from mayor and council for Spyglass Ridge Winery. The letter would point out the economic value of the winery’s events to the city. Council member Brosious stated that a letter of support, without knowing the winery’s legal situation, wouldn’t be prudent. A vote on the letter was delayed.

Citizen and council candidate Victoria  Rosancrans told council that The Santa Parade will be held on Saturday, November 27 at 6pm. Mayor Karlovich will light the tree in Cameron Park. Over activities include a Christmas movie, music by the Sunbury City Band, and refreshments.

And the mayor announced the Hallway of Treats at City Hall on Friday, October 29, 11-3. Sunbury Trick or treat will happen on Saturday, October 30, 6-8pm.