HARRISBURG (AP) — AP is reporting… Pennsylvania Attorney General Josh Shapiro may be pursuing a new position, but he’s not giving up his current title too fast.  Shapiro, a Democrat who announced his long awaited run for governor this week, said he would not step down as the state’s top law enforcement official as he seeks to replace term-limited Gov. Tom Wolf in 2022.

There is “not a chance” he steps down, Shapiro told reporters after a campaign event Saturday in Harrisburg. He added that there is “too much work to do in the AG’s office, so I’m going to keep doing that work.”  Some Republicans and activists have called for his resignation as he pursues higher office. Similar resignations calls dogged former Republican attorney general Tom Corbett when he successfully ran in 2010 to be Pennsylvania’s chief executive.

State Sen. Scott Wagner, R-York, did resign his office in summer of 2018 in the lead up to his unsuccessful bid to oust Wolf.  Elected officials under state law do not need to resign to run for another office under state law. 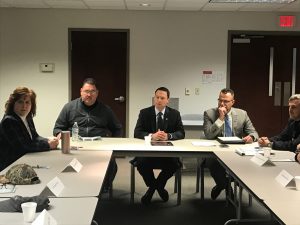