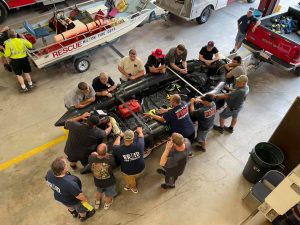 SUNBURY – Volunteer fire and rescue crews and EMS teams had a busy weekend. Sunday morning, most recently, a heater gave off smoke at Nottingham Village near Northumberland. Northumberland County Communications tells us, a dozen fire and ambulance companies responded to that 3am call. The building was ventilated and the all clear sounded.

Earlier, just before 1am, a house was heavily damaged by a fire in Mount Carmel. Again, Northumberland County 9-1-1 tells us, police first on the scene on south Walnut Street. No injuries reported and the Red Cross is helping the occupants. The county said that fire went to two alarms and six fire companies responded. Crews were on the scene until around 5am Sunday.

And in Milton Saturday, around 1:30pm, volunteers tell us, during a training exercise involving a Milton fire department boat, the boat capsized in a the river and four fire department personnel ended up in the river. On the Milton Fire Department Facebook page, the narrator says the crews relied on their extensive training to rescue themselves. Additional boats were summoned to help and recover the boat. Their volunteers were taken to the hospital as a precaution.

Saturday September 25, 2021 at approximately 13:28 during a training exercise boat 15 experienced some mechanical issues. The boat then became entangled in some trees causing the boat to take on a significant amount of water and causing it to capsize putting 4 fire department personnel into the water.  These members relied on their significant amounts hours of training to be able self rescue themselves to a group of trees on the shoreline until additional rescue boats arrived to rescue them.  A large amount of the water rescues we are called to happen during high or flooding waters thus the reason for the training session today in those conditions. All members were transported to local medical facilities evaluated and released.  Boat 15-2 and Boats from Lewisburg were in the water to assist. Boat 15 was recovered by units from Snyder and Northumberland County at the Sunbury Marina.  A boat from Mifflinburg stood by as a backup.