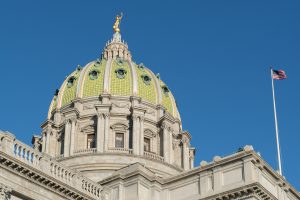 HARRISBURG, Pa. (AP) — Republicans who control Pennsylvania’s Legislature are reprising a fight from last year, passing legislation Monday to require Gov. Tom Wolf to go through them if he wants to impose a price on greenhouse gas emissions from power plants.  The bill passed 35-15 in the Senate, a veto-proof majority for a bill that Wolf’s office said he will veto. Six Democrats joined every Republican in voting for the measure, which has support from blue collar labor unions whose workers maintain power plants, build gas pipelines and mine coal.  The bill still must go to the House.

The sponsor, Sen. Joe Pittman, R-Indiana, said joining the Regional Greenhouse Gas Initiative will prematurely force coal-fired power plants in his district to close, throwing people out of work and drying up million of dollars in property taxes that fund schools there.  He also warned that it will hurt waste-coal plants, which have been instrumental in cleaning up piles of waste coal that poison rivers with acidic runoff, and send demand for power to neighboring West Virginia and Ohio.

Imposing a price on carbon emissions would raise hundreds of millions of dollars annually for the state. The Wolf administration expects regulatory approval later this year, with carbon pricing to begin next year.  With Wolf’s support on Monday, Democratic lawmakers unveiled legislation on how to spend the money, including grants to reduce carbon emissions, improve energy efficiency and aid communities hurt by plant closures.

HARRISBURG, Pa. (AP) — Pennsylvania’s counties and municipal governments will see the lowest level of annual fee revenue they get from Marcellus Shale gas wells, as drilling slowed and prices sank during the pandemic, the Pennsylvania Public Utility Commission said Monday.  Impact fee revenue from Marcellus Shale wells sank to $146 million from drilling activity in 2020, down $54 million from the year before, the commission said.

Lawmakers authorized the fee in 2012, pinning it to new wells and the price of natural gas.  But the average price of natural gas in 2020 was $2.08 per million British thermal units, down from $2.63 in 2019. Pennsylvania also saw the fewest number of new wells drilled than in any year since the law was enacted, the commission said.

Most of the money, about $71.5 million, goes to county and municipal governments, while smaller amounts are earmarked for environmental improvement programs, roadway repairs and water and sewer infrastructure upgrades.