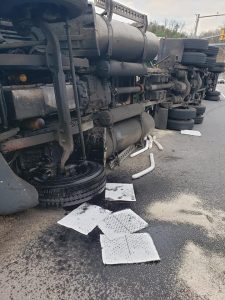 SHAMOKIN DAM – State police are out with details on a truck crash over a week ago on Routes 11 & 15 in Shamokin Dam.   Troopers at Selinsgrove investigated the March 27 incident at the intersection of Routes 11 and 15, at the site of the former Tedd’s Landing restaurant.

They say a tractor-trailer overturned when the driver from York PA, 61-year-old James Keller was turning from Route 11. Police said Keller was wearing his seatbelt and was not injured, but received a citation for an inspection violation. No one else was hurt in the wreck.