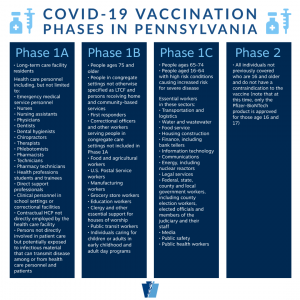 HARRISBURG, Pa. (AP) — Associated Press is reporting…State officials are considering a plan to move teachers up in the vaccine line in a bid to get schools reopened more quickly.  Rep. Tim O’Neal, R-Washington, who sits on the state’s coronavirus task force, told The Associated Press on Monday that Wolf and his acting health secretary, at Sunday’s task force meeting, discussed making it possible for teachers to get vaccinated soon.  “I was under the impression that that was the way they were going,” O’Neal said.  The state is still in Phase 1A of its vaccine plan, offering the shots to people age 65 and over and younger people with high-risk medical conditions — a population that numbers around 4 million.

Teachers currently are grouped in Phase 1B, along with grocery store workers, first responders, manufacturing employees and others considered to be essential workers.  Teachers unions, superintendents, school boards and other education groups have asked Wolf to prioritize school staff for the COVID-19 vaccine, calling it an “absolutely essential” step toward reopening schools and keeping them open.  The discussions about vaccinating teachers are happening as school districts face pressure to bring students back to classrooms for in-person instruction, and as the Wolf administration develops a plan to roll out the Johnson & Johnson vaccine just authorized by federal regulators.

Meantime, AP is also reporting… Fans will soon return to pro sports venues whose stands have been empty for a year or more as Pennsylvania on Monday eased restrictions on large gatherings to reflect a sustained slide in new COVID-19 cases, hospitalizations and deaths.  Under the relaxed gathering limits announced by Gov. Tom Wolf, outdoor venues are now allowed to host events up to 20% of their maximum capacity, while indoor occupancy will be 15% of maximum capacity, regardless of venue size.

“We need to balance protecting public health with leading the state to a robust economic recovery,” Wolf said in a news release. “We are lifting mitigation efforts only when we believe it is safe to do so.”  The Pittsburgh Penguins said it would allow 2,800 fans into PPG Paints Arena for Tuesday’s game against the Philadelphia Flyers. It will be the Pens’ first home game with fans since a victory over Montreal on March 8, 2020.  In Philadelphia, the Wells Fargo Center said it would quickly allow fans into Flyers and 76ers games if city officials give the go-ahead

PIAA, the governing body for Pennsylvania interscholastic sports, meanwhile, said the relaxed statewide limits could pave the way for fans at winter sports playoff contests. The board of the Pennsylvania Interscholastic Athletic Association said it would discuss the matter at its meeting on Wednesday.  For both indoor and outdoor events, venues must require masks and follow physical distancing guidelines, state officials said. Venues will be permitted to seat spectators in groups of up to 10, or more than 10 if everyone lives in the same household. Seating pods must be separated by at least 6 feet.