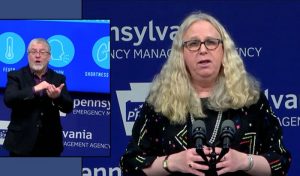 HARRISBURG – Two new Valley COVID-19 cases have been confirmed, along with nearly 1,000 new statewide cases. In its daily update Friday, the state Department of Health confirmed one new Northumberland County case at 401 since the outbreak and 11 deaths. A new Snyder County case has also been confirmed at 93 overall and two deaths. Union County’s case count has been reduced from 135 to 132 overall cases since the pandemic, and two deaths. Montour remains with 93 overall cases and three deaths.

Statewide, 970 new cases have been confirmed, and there have been over 112,000 total cases since the start of the pandemic, of which 75% have recovered. 13 new deaths have also been confirmed, with the state death toll still over 7,100.

Allegheny County is reporting an increase of 244 cases and Philadelphia County is reporting an increase of 130 cases. Of the new cases in Allegheny County, 30 cases have specimen collection dates from more than two weeks ago and at least 77 are known to be among long-term care residents and staff. Statewide increases in 19-24 year-olds continue, including nearly 8 percent of cases in April to nearly 15 percent of cases so far in July in north central PA.

There are 643 patients who have a positive serology test and either COVID-19 symptoms or a high-risk exposure, which are considered probable cases and not confirmed cases. There are 1,104,824 people who have tested negative to date.

Approximately 8,214 of our total cases are in health care workers. County-specific information and a statewide map are available on the COVID-19 Data Dashboard.