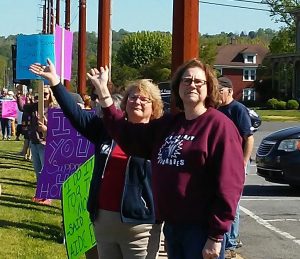 SUNBURY – More now on the impasse between involving Shikellamy School District and the union representing support staff.  Union representatives argue it’s unfair to expect fewer than 75 workers save the district that much money…the union representative says secretaries, aides and cafeteria aides are not eligible for benefits as part-timers, so lowering part-timers wages is unfair.   The district concedes it may pay more than its proposed wage scale “due to any special skills” but refuses to raise its proposed hourly rates to meet union demands.

A spokesperson for the union said the school board’s decision to vote on a proposed subcontractor at its regular monthly meeting June 16 is another example of bad faith negotiating and he says legal action may be the next step. Mark McDade said, “The Employer has engaged in bad faith negotiation since this past September, when it abruptly pivoted to its current, unrealistic proposals. Conversely, the Association continues to move closer to the middle.”

“So, the record of this negotiation illustrates quite clearly that the school board is not interested in reaching an agreement with the secretaries and instructional aides – they much rather subcontract their work to the lowest bidder.   We believe that the school board is making a tragic mistake. Not only will the students suffer when the New Jersey company fails to provide a quality workforce, but they also will get overruled by a court decision which will cost the taxpayers’ money – unnecessarily,” he said.

The school board is scheduled to vote next week on a subcontractor who can take over running the support staff positions at a cost savings of about a half million dollars annually.  The current contract between the district and the Shikellamy Educational Support Personnel Association expired a year ago, and the district is demanding the current support staff bear the brunt of lowering the district’s costs by about $3 million over the next five years in order to secure a new agreement through June 2026.