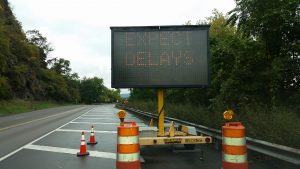 SUNBURY — PennDOT says they’ve heard some favorable remarks about the $14 million Duke Street project in Northumberland, “We’ve had a lot of positive feedback. People express how much easier it is to maneuver through the borough, so that’s a good thing. We made some improvements to the intersections and the traffic signals, we widened them out so trucks can move a lot safer. There’s more area for the trucks making a left hand turn so more vehicles can stack up. So, traffic can move a lot safer and a lot swifter through the borough’”

He says they’ll be done in several weeks, “There’s only a few things that need to be completed such as the final line painting. We put temporary lines on, and come back a few weeks later and put the final line painting on. There’s also some pavement markings that have to be finished up such as crosswalks. A couple sidewalks need to be repaired, and some areas where top soil needs to be filled in and some seeding needs to be done. So, just some general clean up.”

Deptula tells WKOK traffic will be slow while they are painting some of the lines, and while they are doing the crosswalks, there may be some flaggers present, however, there won’t be any major delays as there have been the past 4 years.   You can hear his remarks on the WKOK Podcast page.