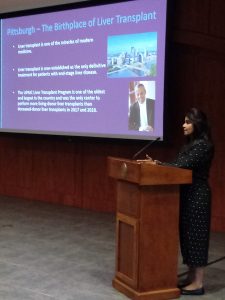 LEWISBURG – Living liver donations can save lives and UPMC says they want to promote the idea and educate the public about the process. UPMC held a town hall at the Elaine Langone Center at Bucknell University in Lewisburg Thursday night to raise awareness, educate donors, and answer questions.

Living Donor Program Medical Director Dr. Swaytha Ganesh, says that the number of people on the waiting list to receive a liver transplant ranges into the thousands, “There are several patients listed on the wait list, at least 15-16,000, and the number of liver transplants each year do not exceed more than 6,000 or 7,000. That has been stable over a period of time. And that 25% of the people succumb to the disease or lose their window of opportunity to get a transplant because they are so sick. And that is why we say there is a huge unmet clinical need because of the disproportion between the demand and the supply.”

Dr. Ganesh says that the liver grows back to full size in almost ninety-nine percent of donors in eight to twelve weeks, “It actually hypertrophies, or meaning, it enlarges, and compensates, and grows to full volume of the liver the person had before the living donor surgery. That is a phenomenal thing. And not only that, during the time the liver is growing back, the person does not go into liver failure because the liver steps up and does compensate for the rest of the liver and does the work of the liver; of metabolism, detoxification, production of the antibodies, all of it.”

UPMC says that a living liver donor does not always have to be a relative. Living donors can also be friends, spouses, co-workers, neighbors, or anyone who wishes to help. They encourage people to considering finding out more at UPMC.com.