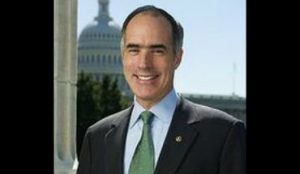 WASHINGTON, D.C. – President Joe Biden is getting a thumbs up from U.S. Senator Bob Casey (D-PA) after a year in office.

In a statement Thursday, marking one year anniversary of President Biden’s Inauguration, Senator Casey says the administration has made ‘substantial progress’ to combat COVID-19, as well as getting people back to work and improving the US economy.

Casey says the president has seen more than 200 million Americans receive vaccines, including eight million Pennsylvanians. He said there were more than 6.5 million jobs created, which he said is the most created in a short time in our Nation’s history. Casey also credited Biden with creating Child Tax Credit payments, which he says has lifted millions of children out of poverty.

“One year ago today, President Biden and Vice President Harris inherited the worst public health crisis in a century and major economic challenges. Since that time, the Biden-Harris Administration has made substantial progress to combat COVID-19, get people back to work and get our economy back on track.  More than 200 million Americans received vaccines and more than 6.5 million jobs were created last year—the most ever in our Nation’s history. Communities have just begun to feel the impacts of the infrastructure law, which will create jobs and bolster local economies for years to come.

“We still have work to do to reach the light at the end of the tunnel of this pandemic and lower costs for families, but President Biden promised to Build Back Better, and with Democrats in Congress, he’s doing just that.”

The Biden Administration has made significant progress to protect Americans from the COVID-19 virus and its variants. Nationwide, vaccines have prevented 1.1 million deaths and 10.3 million hospitalizations. There are 375 million at-home tests available per month now compared to zero on the market at this time last year. This progress has allowed 95 percent of schools to open right now compared to just 46 percent last year when the President took office.

The President’s actions have also bolstered and accelerated economic recovery. Not only have millions of jobs been created, but the unemployment rate has dropped from 6.4 percent to 3.9 percent. The American Rescue Plan sent Child Tax Credit payments to the families of 2.2 million Pennsylvania children, while lifting millions of children out of poverty nationwide. Families also received $1,400 economic stimulus payments and expanded unemployment to help during the economic turmoil and uncertainty brought on by the pandemic. More than ten percent of Pennsylvania workers were supported by some form of unemployment insurance to make ends meet in 2021. The American Rescue Plan also provided $1.2 billion for home and community-based services in Pennsylvania, allowing more seniors and people with disabilities to receive care where they want it and lifting up the workers proving that care. The law also provided funds to combat the COVID-19 crisis in nursing homes and help seniors receive meals and other services at home.

The infrastructure law represents a once in a generation investment in middle class jobs and future economic prosperity, rebuilding roads and bridges, bringing high speed internet to small towns and rebuilding communities that have for too long been neglected. Specifically, the law provides Pennsylvania with $11.3 billion for federal highway programs, $1.6 billion for bridges, $2.8 billion for public transportation, more than $3 billion for abandoned mine land reclamation, at least $100 million for broadband, approximately $87.5 million for Appalachian Development Highway System roads, around $355 million for airport development as well as funding to replace the 160,000 lead service lines in the Commonwealth. Pennsylvania has already started to see that funding, including the first round of investments for airports, bridges and ports and waterways.