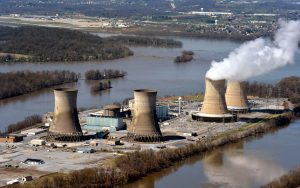 MIDDLETOWN – Stateimpact Pennsylvania is reporting…The company responsible for decommissioning the Unit 2 reactor at the Three Mile Island nuclear plant is delaying demolition of the reactor’s two cooling towers, the project director said Wednesday.  Frank Helin told the TMI-2 Community Advisory Panel that the towers will come down in 2022 instead of this fall.

The decommissioner, TMI-2 Solutions, is a subsidiary of EnergySolutions, a Utah-based company that tries to turn a profit by dismantling inactive nuclear sites under budget. TMI-2 Solutions acquired the reactor’s license from FirstEnergy in December.  The company plans to start removing what remains of TMI-2’s damaged core by mid-2022. It expects to complete the entire clean-up process by 2037.  EnergySolutions spokesman Mark Walker said the delay in taking down the cooling towers does not affect the rest of the process.  “During the planning process of TMI-2 decommissioning we determined there would be less impact to other decommissioning activities taking place on the island later this year,” he said in a statement.

That includes the transfer of spent fuel from TMI-1, the plant’s other reactor, out of underwater storage and into dry containers.  TMI-1, owned by Exelon, closed permanently in 2019.  The state Department of Environmental Protection said the cooling tower demolition does not present a safety risk.  Eric Epstein, chair of the watchdog group Three Mile Island Alert, said that while he is not concerned about the cooling towers, he believes the reactor building may have more radioactive material than the company is prepared to deal with.

“Our concern is making sure that the plant is finally cleaned up 42 years later,” he said. “We don’t believe the company that owns TMI-2 has the technology, the expertise, or the resources to clean the plant up.”  On its website, TMI-2 Solutions says it anticipates the project will cost $1.06 billion. It says the trust fund dedicated to the reactor’s decommissioning contains about $877 million, but that fund growth over time will provide enough money to cover the costs.