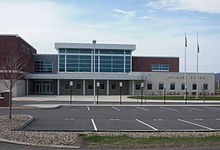 DANVILLE — An educational consultant and two doctors have joined the Danville school board. The Press-Enterprise reports the school board approved Yohannes Getachew, Victor Marks, and Jennifer Gurski at Wednesday night’s meeting. The Press-Enterpise says Getachew and Marks were appointed to terms that will last until December 2021.

Gurski replaces Dawn Koons-Gill for the two months left of her current term. Gurski is the former assistant principal at Danville Area High School according to the report in the Press-Enterprise.

The school board was recently depleted by sudden resignations from Koons-Gill, former President Kevin Brouse, and Josh Seidel. Seidel did not state a reason for stepping down. Board President Kevin Brouse and board member Dawn Koons-Gill resigned last week. Their resignation letters cited conflicts with other members and a perception of dishonesty.