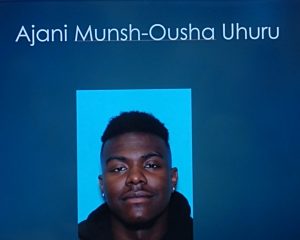 SUNBURY – The suspect from last Thursday’s fatal shooting in Sunbury is facing criminal homicide, voluntary manslaughter and other charges after being apprehended Monday afternoon in Philadelphia. His father is also now in police custody for allegedly hindering the arrest of his son.

Uhuru was arraigned by Sunbury District Judge Mike Toomey Monday evening, and is now jailed without bail in Snyder County Prison. A preliminary hearing is scheduled for next Tuesday, but its likely to be rescheduled.

Chief Hare also said Uhuru’s father, Ajani Uhuru Sr., was arrested for hindering the apprehension of his son. The father is now jailed at the Northumberland County Prison. Court papers say Uhuru Sr. was stopped near Elysburg while driving his son’s car back to Sunbury and was detained without incident.

Uhuru is accused of killing 30-year-old Kareem Jakes of Sunbury during an incident at the Penn Jersey Mart at the corner of Fourth and Race Streets last week. A motive is still unknown and the investigation continues.

You can watch the press conference on our Facebook page.