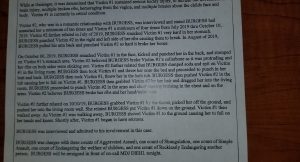 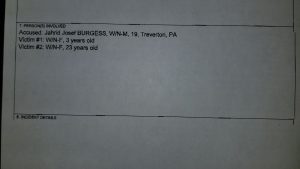 TREVORTON – State police say they have made an arrest in the severe assaults of a 3-year-old child and a woman in Zerbe Township, Northumberland County. Arrested was 19-year-old Jahrid Burgess of the Trevorton area. They say he attacked the child leaving her in Geisinger in critical condition, and he repeatedly assaulted the woman.

Troopers in their arrest papers detail Burgess’ attack and the charges; they say the toddler had a brain injury, vaginal injuries, broken ribs, and multiple bruises on her face and body. The 3-year-old was ‘stomped on,’ punched, had several broken bones, and attacked in other manners.

The 23-year-old woman, who police say was romantically involved with Burgess, was assaulted on 10 occasions since July, breaking her ribs, and other bones, and sustained other significant injuries. A graphic, further description of the attack is posted at WKOK.com.

Jahrid Burgess was arrested Thursday after an ambulance was called to home, he’s charged with aggravated assault, strangulation, and many other charges. Arraignment and jail information is not yet available.