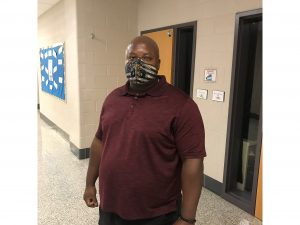 DANVILLE – Still a political issue . . . The Danville Area School Board held its regular monthly meeting Tuesday evening and it was one of the fastest on record. While a few other issues were discussed, public attendance was focused on the hot-button issue of mandated masking.  The district will comply with the state’s mask mandate.

Richard Brown, who has three children in the district, praised the board’s decision to accept the mandate, “I just want to say I think you guys are doing a good job, you’re complying with everything the way you should. This is something serious. What we need to continue to do is come together as a team to protect our kids and make sure we have their interests first. They need us to pull together.”

He left a $15 quick test with the board to research and possibly utilize in the nurse’s office to assist with coronavirus mitigation efforts throughout the district campuses.

Father of two, Peter Gorney, cited asthmatic conditions in his choice to go unmasked at the meeting, although the requirement to wear one was clearly specified and a security officer handed him a paper mask before the meeting started. Gorney proposed a petition for a special meeting to vote on the masking issue. He stated during his public comment, “Parents should be making that decision for the students, for their children, not the school board. We’re responsible for our kids’ health, not you.”

A letter from the solicitor of another Pennsylvania school district was shared with all participants, which outlined the consequences to every district, its personnel, and elected school board if the state’s masking mandate was not followed.

District Superintendent Ricki Boyle said, “We did vote for parents to have a say on whether their child wore a mask or not but now there’s no vote for the school board. It is a mandate, an order, and we have to comply, so we’re complying in every way possible.”

School Board President Chris Huron added, “We were very, very concerned and very focused on making sure transparency was at the forefront, and that we stayed within the framework of our responsibilities and obligations to drive the district in a positive direction – with kids at the forefront of every decision we make. It’s all about the kids and it stays all about the kids.”

The full school board meeting is available for viewing on the district’s YouTube channel.