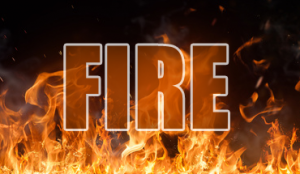 Turbot Township Fire Company Captain Doug Wilson says the fire was first reported just before 3:30 p.m. Tuesday along the 2400 block of Broadway. That’s where he says a homeowner was doing some outdoor burning when the fire went out of control

Wilson says flames were knee high upon firefighters arrival, and smoke was visible from I-80. He says the flames were working toward a4

house, but then the wind turned the flames up a nearby mountain and approached a grass field with other houses above it. Wilson says it took about 30-45 minutes for crews to knock down the fire.

Wilson says a firefighter did sustain a sprained ankle toward the end of the call while working in the dark. He says that firefighter went to the hospital but is expected to make a full recovery.

This comes as lots of other brush fires have been occurring throughout the Valley lately. Wilson says residents should watch for windy days, don’t leave fires unattended outside and keep a hose nearby.