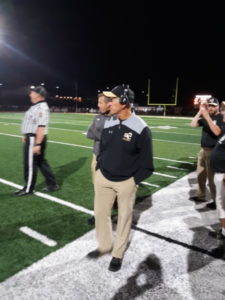 Click here for the full interview from The Steve Jones Show.

Roth passed Berwick’s George Curry with the Tigers’ fourth straight and eleventh overall state title in Saturday’s win over Wilmington, “Just what he did for football in the region and in the state…just to be in the same category with someone like him is an honor, its humbling…the whole record thing is humbling and I look at it more as a reflection on our program.”

Roth, who now has 456 career wins, says he even got to know Curry over the years in his post-coaching days.

Roth says it’s special to keep follow in the footsteps of past dominant programs in the Valley, “That’s something that we feel proud about…the fact that we did it for our district, our school, but for the area to maintain such a winning tradition.”

Roth calls this year’s state championship the most impressive, because the team’s approach after losing so many key pieces from last year, “These guys were just a loose…I don’t think I had a team that had as much fun at practice…not being phased by the graduation losses and losing so many outstanding players…and not just the Division-I players…but we lost eight starters on both sides of the ball. They just stepped in from day one and got after it.”

Next season, Southern Columbia will look to tie its own record of consecutive state championships of five. The Tigers have also won 60 straight regular season games – the second- longest in state history – and they’ll earn the record with a 7-0 start to next season.