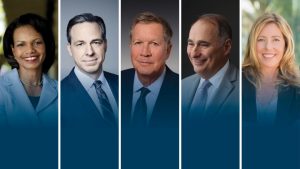 LEWISBURG – Lots of big names in American politics will be a part of this year’s speaker series at Bucknell University, ‘The State of American Democracy.’

Bucknell says the series kicks off with Condoleezza Rice, the first female African American secretary of state and first woman to serve as national security adviser. She’ll appear via Zoom September 13 at 7 p.m. at the Weis Center for the Performing Arts, with the event hosted by Bucknell President John Bravman.

Other speakers include Jake Tapper, CNN lead Washington anchor, November 30, and John Kasich, former Republican governor of Ohio and presidential candidate, February 28. All appearances will be at 7:30 p.m. in the Weis Center.

Also speaking will be Bucknell 1986 graduate Barbara Walter, a leading scholar of civil wars and the author of New York Times bestseller ‘How Civil Wars Start (and How to Stop Them) April 4 in Trout Auditorium at 7:30 p.m.