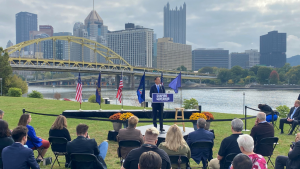 HARRISBURG, Pa. (WHTM) — WHTM is reporting… It was never a question of if Josh Shapiro would run for governor, just a matter of when he would announce. Well, Wednesday was the day for the sitting Attorney General.  Diminutive in nature, Josh Shapiro repeatedly spoke of taking on big institutions and defending the little guy as an attorney general. He’s now seeking the state’s highest job.  “I’ve fought for people who have been wronged, citizens who have been left out, and communities that have been forgotten,” Shapiro said. “That’s the kind of leadership we need right now.”

He promised better highways and better access to the information superhighway and promised to tackle systemic inequality like black-owned businesses only getting 4% of state contracts.  Get daily news, weather, and breaking news alerts straight to your inbox! Sign up for the abc27 newsletters here!  “We’re gonna change it by giving a damn. We’re gonna change it by acknowledging that reality and do something about it,” Shapiro said.   The Democrat said he’s not energy’s enemy, which historically pits Republicans who want to protect jobs versus Democrats who want to protect the planet. “I refuse to accept that false choice and so should you,” Shapiro said.

But a large and growing GOP field will argue that Shapiro is a bad choice. They’ll try to tie Shapiro to Tom Wolf and they already have.  A statement from PAGOP Chairman, Lawrence Tabas reads: “Josh Shapiro will definitely level up to Tom Wolf’s far-left agenda, which everyday Pennsylvanians flat out reject. They want someone who actually respects their freedom and represents their interests. Republican leadership will be the answer next November.”

CHICAGO (AP) — AP is reporting… First lady Jill Biden wrapped up a visit to Illinois on Wednesday with a stop at a community college before heading to Pennsylvania during a three-state tour in honor of Hispanic Heritage Month.  She toured the Arturo Velasquez Institute in Chicago with Education Secretary Miguel Cardona and elected Illinois officials including Gov. J.B. Pritzker. The night before she visited the National Museum of Mexican Art in Chicago to see an exhibit honoring victims of COVID-19.

Biden was expected in Allentown, Pennsylvania, later in the afternoon where she was set to meet with Health and Human Services Secretary Xavier Becerra at a center for children and families, according to the White House.  Earlier this week she was in Kansas City to tour El Centro Academy, a dual-language early childhood education program.