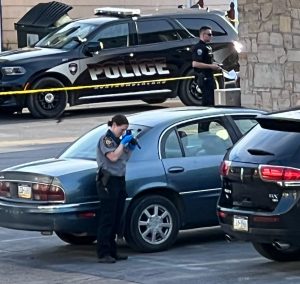 The suspect has been identified as 23-year-old Ajani Munsh-Ousha Uhuru.  He is described as a Black male, 6’2”and is considered armed and dangerous. Sunbury police chief Brad Hare says Uhuru will be charged with homicide when he is captured.

The suspect was driving a blue BMW with tinted windows, but that vehicle may have been found. There were reports from police the suspect may be headed toward the Pittsburgh area.

The killing happened at the Penn Jersey Mart at the corner of Fourth and Race Streets around 4:15 p.m. Thursday.  A wide swatch of the city was blocked off near the crime scene.

Chief Hare said at least two shots were fired during the argument between the gunman and the victim. He said there were several other people in the store at the time but no one else was hit.

Officers say the weapon has not been recovered.