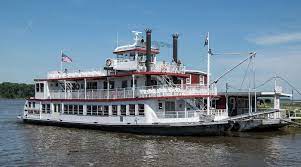 NORTHUMBERLAND – “Heartbroken but not giving up” are the words of Central Susquehanna Riverboat Society President Bob Lagerman as plans have stalled to bring a 149-passenger riverboat to Lake Augusta.

The hoped for riverboat the group wanted to buy was sold and is now unavailable. The Society was moving forward with plans to have the boat here for the 2023 boating season. They met with the Northumberland Borough Community Development Committee Monday.

Lagerman told WKOK, they are now looking for a similar boat. This one was 149-passenger, 92-foot Mark Twain boat from Pinnacle Marine in Kentucky.

He says the group has been working on bringing this type of boat to Lake Augusta for six years.  They’ve also been consulting with Hiawatha operators in Williamsport and the people who run the Pride of the Susquehanna in Harrisburg.

Lagerman says the idea has public support and the idea would ‘compliment the area very well.’ He says they have some fundraising to do, needing $250,000 to jumpstart the endeavor.

He says the boat would be moored near Sea Scout dock in Northumberland.

The group still needs support from Northumberland Borough Council as well, and will speak at the borough’s June 7 meeting.