Preview of Upcoming WKOK Sunrise and On The Mark

7:10am: Ben Hayes, Program Director, Watershed Sciences & Engineering, Bucknell University, and Sean Reese, Program Scientist, Watershed Sciences & Engineering, Bucknell, on the upcoming Susquehanna River Symposium Friday, November 5th and Saturday Nov. 6th. Highlights will include discussion and remembrances of the Agnes flood as we near the 50th anniversary, this year’s event will highlight and promote collaborative partnerships that focus on improving the health and resilience of streams and aquatic ecosystems, from the headwaters to the bay.

7:40am: Stacy Wallace, Republican candidate for Commonwealth Court…She hails from McKean County, is running on a platform of ‘follow the law as written,’ and ‘follow the state and US Constitutions.’  www.stacyforpa.com

On The Mark with co-host Joe McGranaghan:

8:32am to 8:42am: Timothy P. Carney.  Tim Carney is a senior fellow at the American Enterprise Institute (conservative think tank), answering Joe’s question; Are the political parties killing the US?   We’ll discuss the division in the US, the role of the big political parties, the ‘Let’s go Brandon’ phenomenon that has popped up lately, and ask…was Pres. Trump a disease or a symptom in the US? We’ll preview his upcoming appearance at Bucknell.

8:42am to 10:00am: Open phones.  Joe says he is still unsatisfied. He wants his grandkids to have a great country and he’s getting worried. 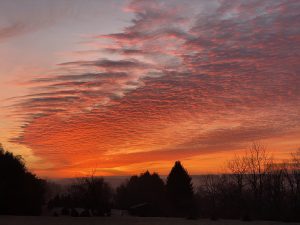 Another stunner of a sunrise recently, at the Sunbury Broadcasting Corporation

Listen to past Shows

LISTEN: On The Mark Interview with State Senator John Gordner

Listen to the WKOK Podcast Here

Mark Lawrence and Joe McGranaghan host State Senator Gene Yaw (R-23rd, Loyalsock), on his recent commentary on the outcome, anomalies, and failed challenges to the 2020 Presidential election. We also discussed his opposition to Gov. Tom Wolf’s COVID-19 restrictions, especially restaurants and bars. Also, the state budget, his reelection and his 2021 goals.

Click on the above link to listen to the interview. 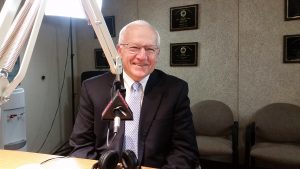 State house member David Rowe discusses the confusion from Gov. Wolf’s shutdown request, and how we can all stay safe.

House member David Rowe on WKOK’s On The Mark

On The Mark Archives are now on the WKOK Podcast page

Click here to listen to all of WKOK’s many interesting podcasts.

Mark Lawrence and Ben Reichley host Freddi Carlip of Lewisburg, and Mariasha Baumgarten, co-director, Chabad of Lewisburg, on the upcoming Menorah lighting in Hufnagle Park, this Sunday, 4:30pm. Chabad of Lewisburg is holding the community lighting, then a Grand Chanukah Part at the Greenspace Center. We talk about the growing community of Chabad, an increase anti-Semitism in the US and the ‘Tree of Life’ recovery.

During open phones we talked about the state legislature being encouraged to bail out the nuclear power industry which has fallen on hard times because of the natural gas industry. We talk about corporate welfare, the employee impact in the community and more.

Mark Lawrence (is back!) and Joe McGranaghan argue about President Trump, his hugely successful impact on the US economy, and his moral failings. We talked about Wall Street, climate, and the President’s remarks on Tritter.