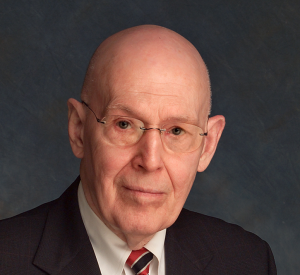 SUNBURY – A well-known attorney and active community leader is being remembered not only for his dedication to his law practice, but his devout Christian faith and deep care of others. John Carpenter died last Wednesday, he was 87.

His law partner of 33-years Bob Diehl says he and Carpenter joined forces in 1966 when Diehl’s grandfather became judge, “I think we got along because we were friends since high school…really since junior high. After that, we stayed friends and it just seemed like the natural thing to do. He practiced in an area that he was very good at and I practiced in other areas, and I thought we made a very good team.”

Carpenter spent most of his work doing trials representing Insurance Defense companies. He was noted for being very meticulous with his work.

Carpenter was also a devout Christian and often led daily devotions, and practiced his faith in his work with Diehl, also a devout Christian, “I know we many times tried to…when we were doing family law…keep people together, keep marriages together. But we couldn’t do that anymore because of the no-fault divorce…we just got out of it.”

Another current Valley attorney, Tony Michetti remembered how Carpenter first helped him establish himself as a lawyer, “He reached out to me as a very young lawyer and was a true professional about explaining local practice, getting me some work and helping me as a young lawyer. I remember going to lunch at Sunbury Community Hospital with John. He would take me down to the snack bar there…chicken salad sandwiches.”

Carpenter was also very active in the community, including serving as President of the Pennsylvania Bar Association, solicitor and advisor to Susquehanna University, and on the board of the Sunbury Community Hospital.