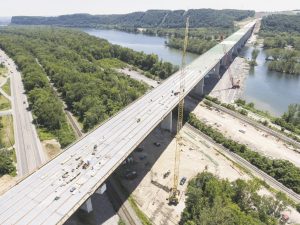 SELINSGROVE – CSVT northern and southern sections are on target for completion, but on very different timelines.

With the new bridge over the Susquehanna River ready for paving, PennDOT says the northern section of the Central Susquehanna Valley Transportation project may be open for traffic by next fall. Collin McNeil, Transportation Construction Manager of PennDOT District 3-0, “Everything’s on budget, we’re right on schedule with the project completion. Right now we’re expecting everything to be opened up late next year, sometime in the fall.”

But Matt Beck, PennDOT Assistant District Plans Engineer said the southern section has been delayed, and there are some challenges, “The most common complaint that we get relating to construction activity at night is the single-tone backup alarm. So, for this project, we plan to use a relatively new technology that involves directional white noise backup alarms. They’re meant to focus the noise where it’s needed, more directly behind the vehicle.”

We previously reported on the two-year delay caused by the ash basins that were unable to support a new highway, which Beck further explained, “We looked at a series of options to try to modify the route. We looked at potential improvements within the ash, we looked at potentially for bridging over the ash or even removing it, but none of those would have been cost-effective or completely eliminated the risks that we’re ultimately avoiding by going around the ash basins.”

Both said the $865 million project is on schedule and on budget. You can hear more from their appearance on WKOK’s On The Mark recently, on the WKOK podcast page.